A forum for DCC RPG judges. This forum covers adventure design, monsters, judges' advice, campaign building, and all other such things.

I reconciled having all of the races in an authentic S&S setting. See what you think: 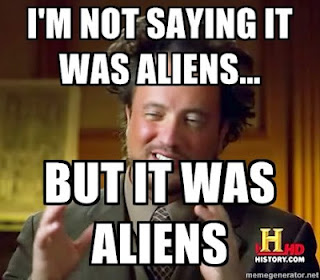 In ancient times the Gods came down from heaven and created the world. First and most beloved of their creations were the Atlanteans, whose ancestral homeland was Atlantis. Second among them were the humans, a primitive race risen up from beastly stock. These were created to serve the Gods and the Atlanteans alike. For a time, the Atlanteans rode the waves and wielded the slave whips of the Gods, forcing the beast-like humans to labor in the fields to grow food and the mines for the Gods, who demanded valuable minerals and metals as sacrifice. In the mainland the Atlanteans built an enormous city full of the wonder and horror of the gods, enslaving primitive humanity in its service. The city was known as Dogon.

Some of these ancient primitives slipped their shackles, fleeing to hide in the hills, mountains, marshes and forests. There their numbers grew, primitive though they were. Some of those who fled to the caves and high mountain tops carried with them certain crafts of the Gods. The humanoids grew in sophistication and built fabulous underground cities that rivaled anything of the Atlanteans. They grew insular and rejected the outside world. These proto-humans evolved and became known as Dwarves. Those who fled to the marshes and deep forests became experts at hiding from the Gods and the Atlanteans. Their descendants were known as the Halflings, and still today prefer living close to nature in a primal state. Still, not all who fled the Atlanteans and Gods prospered: some of them fell into savagery, devolving into beastmen, apes and giants.

The Atlanteans dominated the world for many millennia. Their people were knowledgeable in the ways of magic, fighting and various ancient technologies that the primitive races could never hope to conquer.There was a price, though: One day, the Gods left their creations and Atlantis sunk beneath the waves. All of the Atlanteans were destroyed, save for stragglers fortunate enough to have been mainland at the time. The Atlanteans attempted to maintain the terrible splendor of Dogon, but as the centuries passed, the Atlanteans lost much of their ancient wisdom. They grew decadent and cruel. One terrible day, Dogon vanished in a flash of fire, leaving only a handful of humanoids and Elves who were out of the city on that fateful day alive.

The slaves of Dogon slipped away from their masters and fled, much like the Dwarves and Halflings had many centuries before. Greatly outnumbering the Atlanteans, they won their freedom. They grew strong, self-reliant and cunning. They became the Humans. Their descendants built great nations, and out of them rose the seafarers of Vinnland, the warrior clans of Keltea, and the philosopher-kings of Mardu.

The Atlanteans bred slowly as their life spans stretched into the hundreds of years. The humans were fecund, multiplying quickly. In time, the former slaves sought revenge against their masters, and the Atlanteans fled deep into the earth and into shadow-haunted forests. Their descendants became known as the Elves. There they practiced what remained of their ancient knowledge, striking bargains with lesser gods and demons who still lurked in the astral wastes. They survived, some even prospered, but at what cost? Some of them grew mad in the darkness. They became cruel. Others came to reckon with their past of conquest and high civilization.

The Elves lurked in the secret lairs for centuries, biding for the time when the humanish races would forget the names of Atlantis and Dogon. In this, the present day, the secret history of the earth remains a myth, and the Elves once again walk among their former thrall.

Dwarves: short, muscular. Beards, blonde and read hair is common. Insular craftsmen and warriors who labor at the heart of the Earth.

Elves: Tall, thin. Skin of various shades from near-albino to deepest black. Hair in a similar range. Eye colors exist in an incredible range, such as pinkish, silver, gold, blue and purple. They are exceedingly rare and dwell in forgotten, gloomy places.

Atlantis is gone. The poisonous ruins of Dogon stretch for many leagues, and the ancient artifacts of the Gods lie scattered around a forgotten world. It is a world of blood and horror, but glory as well, and the ancient forces of Law and Chaos have selected their champions. The game is on.
Top

Re: World history for my DCC RPG campaign

I like it. Especially how the races seemed set up to be somewhat antagonistic toward each other.
AKA Paul Wolfe
The Mystic Bull: Check out our two FREE prehistoric adventures: The Steading of the Nergalites AND The Tribe of Ogg and the Gift of Suss
In the Prison of the Squid Sorcerer (PDF) and softcover: 12 Short Adventures for DCC!
The God-Seed Awakens: 3rd Level Adventure for DCC. New patron, new spells, lots of new monsters and the living weapons of the Empire of Thal!
My Gamer Profile
Top
Post Reply
2 posts • Page 1 of 1