Vote for Your Favorite DCC Cover

A forum for discussing the many DCC modules published under third edition rules, EXCEPT for Castle Whiterock, which has its own forum.

Vote for Your Favorite DCC Cover

Let's just say that, hypothetically speaking, a certain company were considering printing up a DCC poster. Oh, you know, nobody I know, just in general. If you had to vote on one such poster option, which of these would be your favorite? 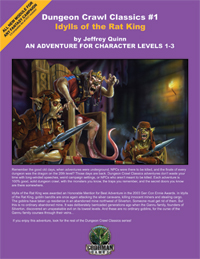 DCC #17: Legacy of the Savage Kings
By William McAusland 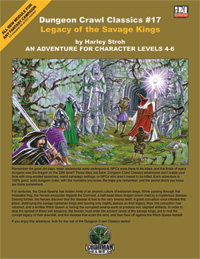 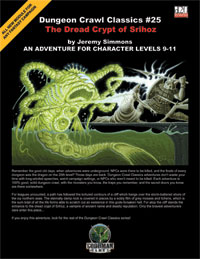 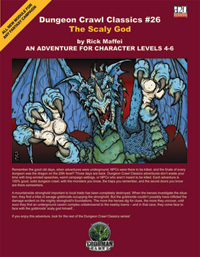 DCC #28: Into the Wilds
By Jim Roslof 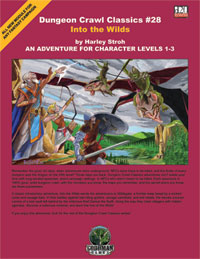 DCC #30: Vault of the Dragon Kings
By Erol Otus 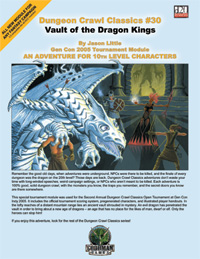 Had to go with Vault of the Dragon Kings. As much as I like Jim Holloway, I believe he's best suited to black and white illustration. It surprises me that The Scaly God cover is up for a vote. The dragon here looks like a stuffed animal to me for some reason. Nothing against Jason Edwards as I do like the bulk of his work so far.
Bret Boyd
Freelance Writer
------------------------
Tricky Owlbear Publishing
Freelancer's Rest (my blog)
Top

I like them all ... but I voted for Vault of the Dragon Kings as well. For two very simple reasons.

One, it features a dragon.
Two, it's drawn by Erol Otus.

Nothing says "Dungeon Crawl Classics" more to me than that combination.
Top

Including two Erol Otus covers is not fair!

I also really love the Roslof cover (28). But Otus is my all time favourite DnD artist -- except possibly Trampier (who sadly does not work in the field anymore).
Top

I'm partial to DCC #25: Dread Crypt of Srihoz, by Erol Otus. That cover just jumped off the page at me. Good stuff.

I can't believe mine was the first (and so far only) vote for Legacy Of The Savage Kings - that cover just oozes a 'mysterious forest' vibe. Little touches like the moss hanging from the tree branches....the whole thing just screams CREEPY to me, and I like that ambience

Actually I pretty much love them all (although Scaly God is a little uninspired); normally I'd go for an Otus cover but the two pictured here are a little too 'close-focused' on the encounter for Srihoz, and the dragon just looks a little goofy to me in Vault. Runner up for me would have to be Jim Roslof's Into The Wild for good, old-fashioned D&Ding.
Top

Umm, not that I'm partial or anything, but blast it all to hell...that cover Erol whipped up for my little ole adventure (Dread Crypt of Srihoz) just KICKS A*S!!!!!! I'm sorry, but there's no competition, there's no chance for anyone else to b-

[Jeremy "Topographic Rex" has been thrown in a cold bath until he calms the hell down...we apologize for his flagrantly partisan speech-ifying. We now return you to your regularly scheduled programming...]

God Save the Penguins
Top

Gotta put out the praise for the Erol Otus maps.

My favorite covers in order are...

I voted for Vault of the Dragon Kings. Who doesn't love the classic showdown with a dragon. I'm a bit surprised that Dungeon Geomorphs didn't make it on the list. It has a cool cover that has a bit of everything; humor, treasure, danger, and of course a good old fashion maze dungeon.
Top

Re: Vote for Your Favorite DCC Cover

I would vote for DCC #25: Dread Crypt of Srihoz. I don't have any reasons as such, but i just liked that poster. Maybe this poster talks about how i play the game.